A precedent for Archbishop John Sentamu 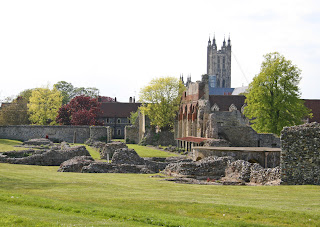 It is a little-known fact that a black African churchman has been offered the post of Archbishop of Canterbury. Despite being asked repeatedly to take up the job due to his outstanding intellectual credentials, however, this forgotten pioneer turned it down. And now, a mere 1,350 years later, it seems possible that another African-born prelate might finally take up the role.
The strongest candidate to succeed Archbishop Rowan Williams is the Archbishop of York John Sentamu, who was born in Uganda. As prime candidate he is already following in the footsteps of St Adrian, a North African who was offered the role in the year 668.
St Adrian has been largely forgotten by the church today, despite the fact that he did accept a lesser but still highly influential role in the 7th century English church. He has had a lasting impact as a result, and could easily be described as one of the founding figures of both the church and the English nation as a whole.
His work in establishing a network of monastic schools means that he can be credited as one of the founders of our entire educational system. Oxford and Cambridge themselves later grew out of the church’s promotion of learning, which St Adrian helped to establish all those centuries earlier. St Adrian was a genius, fluent in several languages and an expert across the academic spectrum, conversant in astronomy and mathematics as much as in theology and classical Greek.
St Adrian’s formal role was abbot of Canterbury’s monastery, which meant he acted as an adviser to the Archbishops in the city.  He spent 39 years nurturing the nascent English church, and died in the year 710 on 9 January, which is now kept as his saint’s day by those who remember him. His grave site is now lost, but lies somewhere amid the ruins of St Augustine’s Abbey, a peaceful English Heritage site a few minutes walk from the cathedral, pictured at the top of this post. Hardly anyone else was visiting the site on the three occasions I called by to pay my respects to our history, in contrast to the bustling cathedral nearby.
He would be an apt figure to remember at the consecration of our next Archbishop under any circumstances. St Adrian’s academic brilliance also puts me in mind of our current Archbishop of Canterbury, Rowan Williams, who was magnanimous in accepting the job despite all the difficulties and burdens that frightened off St Adrian.
On a final historical note, the last Archbishop of Canterbury to be recognised as a saint is St Boniface of Savoy, who was enthroned in 1249 and died in 1270. He too was caught up in the fiercest arguments of his day, standing between the King and the pro-democracy rebel Simon de Montford, neither of whom he managed to please entirely.
It took nearly 600 years after St Boniface’s death before he was formally recognised as a saint in 1839. Just occasionally there are people whose saintly attributes shine through rather quicker than that.
Posted by Nick MS at 18:16 1 comment: