Holy heritage: a boost for Wales 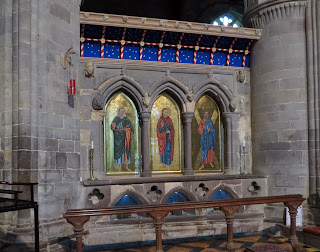 Welsh Assembly member William Powell has called for his country to do more to promote its amazing spiritual heritage. Our recent television series has helped to raise the profile of an amazing legacy of landscapes and histories to be found in Wales.

It is fertile territory in every sense, a land full of Celtic mystery, grand ruins and striking landscapes to attract visitors from all over the world. And it also offers quieter places where local people can gain a sense of identity and connection, a community hub. Or both combined in one, as at St Davids Cathedral where the congregation recently restored its shrine to the patron saint of Wales in 2012 (pictured above in all its revived glory).

This article in Wales Online today (9 May 2013) refers to our recent TV series, which did indeed show off many of the more eye-catching sites and stories around the country. 'Pagans and Pilgrims: Britain's Holiest Places' was funded jointly by BBC Four and Welsh-language channel S4C - which meant that two out of every six sites in each episode were in Wales. Finding beautiful places with exotic tales to tell proved to be very easy.

By way of example, the country is home to "the oldest site of ritual activity in the whole of Britain and western Europe", as the article quotes me saying. Which is true... but for the record I should add that the ancient site in question is so difficult to reach you would risk life and limb to get there if the tides were against you. It's unlikely to become any sort of visitor attraction soon, but the entertaining tale of its discovery shows just how much meaning we invest in our sacred sites.

Goat's Hole Cave on the Gower peninsula is where a slightly dotty 19th century academic discovered the ritual burial of a young man. We mentioned it in the caves episode of the TV series (described in the post below). The body was covered in red ochre and placed inside the cave with shell and bone ornaments. A ritual burial so ancient it involved the tusk of a woolly mammoth, dating back some 33,000 years.

All of this was of great interest to Professor Buckland of Oxford University, who arrived at the cave in a hurry in January 1823, following the cave's discovery by a local doctor and his curate friend the year before. Professor Buckland examined the remains at length before declaring this to be the burial of a woman from the Roman era, probably a witch of some sort. And so the burial is known erroneously as the Red Lady of Paviland.

In fact it remains to this day the oldest known ritual burial in western Europe, offering a tantalising glimpse into a world of forgotten devotions, seemingly a belief in the afterlife that we will never fully understand. Dealing with death is one of the founding principles in pretty much any religion, and Wales can proudly lay claim to the earliest such evidence in this region.

The reason for Professor Buckland's wildly inaccurate dating is also of religious origins: as a devout Creationist he believed the world to be no older than a few thousand years. An interesting handicap for a Professor of Geology.

It is a timely reminder there is much to inspire in our sacred past, and also much to learn from.
Posted by Nick MS at 16:32 No comments: