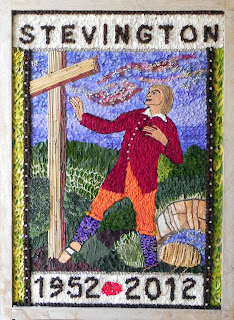 But the gap between the two is narrowing steadily.

On 4 June 2012 I was delighted to attend the first well dressing in Bedfordshire, which celebrated the evocative sacred spring that emerges from bedrock beneath Stevington’s parish church. It’s a site listed in my guide book, and I jumped at the chance to join such a remarkable revival, which the villagers combined with their Jubilee celebrations.

Stevington’s holy well was once used as a curative bath by a medieval hospital run by a monastery. It later became the inspiration to a famous Christian writer from a very different Christian era: John Bunyan. Over the Jubilee bank holiday weekend in Stevington, both these long traditions were remembered by a pageant play, during which a large and cheerful crowd of villagers walked from the village cross to the church, stopping to hear scenes from Bunyan’s masterpiece Pilgrim’s Progress. It ended with drinks on the beautiful lawns of Kathy Brown’s Garden, and afternoon tea in the nearby Church Room.

I’ve argued in my book that Christianity’s cultural output is much more appealing than its theological offerings. The thought occurred to me again as I joined what must have been more than 200 local people celebrating their sacred history. The Times newspaper even carried a half-page article in advance of the event, written by Kathy Brown herself.

This is after all the quintessential holiday experience: the very name holiday means ‘holy day’. In times gone by a community would stop work and hold an annual festival to mark some important date in the Christian calendar, perhaps the patron of their church, or a saint with a local connection - or indeed a festival based around their holy well. Well dressing events have proved to be some of the most enduring examples of such holiday celebrations, and are still popular in parts of the Midlands. The Well Dressing website lists over 100 villages which currently hold an annual event.

Stevington is the newest entry on the list. On display in Stevington’s church porch was the village’s very own floral panel. This sumptuous composition, pictured at the top of this post, is based on the scene from Pilgrim’s Progress where Christian’s burden falls into a cavernous sepulchre, which is modelled on the grotto where Stevington’s holy spring emerges.

Stevington’s celebration is much nearer to my home in SW London than the main Derbyshire well dressing locations, though it would have been worth driving to John O’Groats to experience something as imaginative and uplifting as this community’s lovely and lively day. The little village of Tissington in Derbyshire has the most famous floral displays, viewed by an astonishing 50,000 visitors each year.

I was preaching the night before Stevington’s well dressing at Hertford College, Oxford, and used the city’s holy well at Binsey to make a point about the popular appeal of Christian tradition. It was Trinity Sunday, and at Stevington I proudly mentioned that I had contrived a sermon which dovetailed both the theology of the Trinity and the use of holy wells into my talk. One of the villagers replied that their new vicar, Canon Peter Mackenzie, had managed to link not only the holy well with the Trinity but also the Royal Jubilee celebrations too in a single memorable sermon.

This village once helped Bunyan write one of the world’s most influential and best-selling books. Its sacred landscape has lost none of its power to inspire. 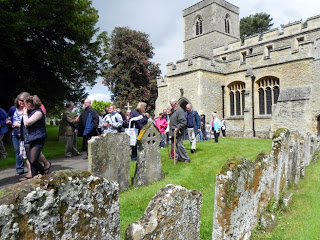