Is the sea good for the soul? 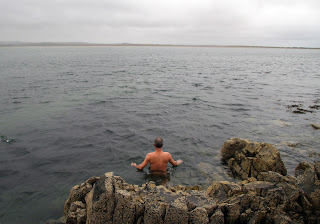 It is the world's most popular tourist attraction by far, the sea. Where else do people go when they have extended leisure time to enjoy, a place for rest and recuperation since... well, who knows how long? This may be one of the fundamental characteristics of human nature that predates all recorded history. Our attachment to natural water runs deep, a basic instinct that we now hurry to satisfy during two weeks off each year.

A new study by the British Psychological Society published in April 2012 demonstrates what most of us have indeed guessed at: the sea is a place of great psychological healing. Getting out into nature has long been known to alleviate symptoms of mental health problems such as stress and depression. It seems that the sea is the greatest of all such agents of natural healing. But have beach resorts and package holiday companies always had the monopoly of this watery phenomenon?

There was a time when religion embraced natural water in the performance of its rites, and not just pagan ones either. The first known Christian liturgy of baptism insisted that entry into the church took place not in a font or even a manmade pool, but a source of naturally flowing water. Baptismal candidates were fully immersed in front of the entire congregation of the church, and not merely naked but stripped of all artificial objects such as jewellery and hair fastenings. It was a rebirth that was as much a physical experience as it was spiritual, a ritual that included both soul and body in ways that seem alien to modern Christianity.

A Christian's immersion didn't end with this single rite of passage either. The use of water for rituals other than baptism is first recorded (as far as I can tell - feedback welcome!) in the writings of Lady Egeria, a brave Spanish pilgrim who travelled from northern Europe to the Holy Land in the 4th century and wrote an amazing travel journal. In it she describes a holy well at Aenon, near Salem, which was originally used by St John the Baptist. "Many brethren, holy monks, direct their steps hither from various places that they may wash there," she writes, and adds that she herself took part in all the customary rituals of the site. Alas she fails to tell us anything about what these 'customary' rituals involved, but perhaps she bathed there too.

Closer to home, the great bishop and abbot St Cuthbert was known to wade into the sea to say his prayers, off the Northumberland coastline at Lindisfarne and Coldingham. I've since discovered around a dozen examples of such hardy devotional practice among Britain's early saints. I did try to emulate St Cuthbert's 7th century example when I visited Lindisfarne late one summer (pictured above) and found it one of the most peaceful and moving experiences to be had at any of Britain's 500 sacred sites listed in my book. So simple too, without any artifice to separate me from creation: no church, no book, no candle, no people.

Any such use of holy water has perhaps become the most neglected of all early church rituals - in the Anglican tradition at least. Which is why it is a happy surprise to hear recently that one church in North Yorkshire has decided to incorporate its charming holy well into weekly liturgical use. During the summer months of 2012, the community at Thornton-in-Craven will hold a short Sprinkling Service every Saturday at 12 noon, from Easter week to the end of September.

The Anglican church lacks any formal liturgy for the use of holy wells, but Thornton's service is based on the form of words used in the Anglican shrine at Little Walsingham in Norfolk. This shrine contains the Church of England's most active holy well by far - though it has scant competition for such a title. A rarity still in Anglican tradition, Thornton's pioneering efforts are all the more valuable for that.
Posted by Nick MS at 09:11 No comments: