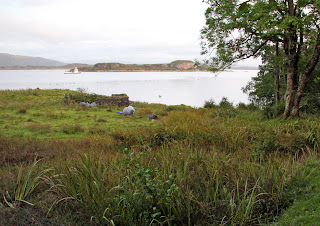 As thoughts turn to the legacy of Britain's stunning 2012 Olympic Games, the bizarre consequences of a little-known boat race that once took place in Scotland's Inner Hebrides come to mind. Many centuries ago two saints had challenged each other in the task of bringing the Christian message to the people of Britain. As sporting competitions go, its progress and outcome are up there with the best of them.

The two missionaries had travelled across the sea from Ireland in their little coracle boats, vessels so fragile that the early Britons described them as leaves, blown by the wind. Spying a suitable island near the mainland, St Columba and St Moluag agreed that the first of them to touch land would claim the island as his own and build his monastery base there.

St Columba rowed the quickest and drew near to the island's shore, certain of victory as he pulled ahead of his rival on the final stretch. St Moluag is said by his colourful medieval hagiographer to have then hacked off one of his own fingers in desperation, and flung it ahead of St Columba on to the beach. From a technical point of view, he had indeed 'touched' the land first, and so the great monastic island was his: the Isle of Lismore.

Unfortunately for St Columba there were no Olympic judging reviews available at the time - this was the late 6th century. Instead the saint had to turn his boat around and seek consolation elsewhere. As silver medals go, his was to prove the most enduring and evocative of any Christian foundation in the entire country: the Isle of Iona.

Few if any pilgrims make their way to Lismore's quiet shores now, in contrast to its one-time rival at mighty Iona. After many miles walking the peaceful tracks and lanes of this beautiful sliver of land, I finally found the beach where these two spiritual athletes supposedly challenged each other. No monument marks the grassy shoreline, pictured above, merely the ruins of a cottage that once housed an illegal whisky still and some navigational buoys stored on land.

Traces of Lismore's glory can however be found at the main kirk on the island, a beautiful white-painted building. It is housed in part of the mighty cathedral church that once stood here, the rest now demolished. Like the forgotten shoreline I had the place to myself. It is an evocative place to wander through the scenes of our past glories.
Posted by Nick MS at 05:10