What the pagans did for us 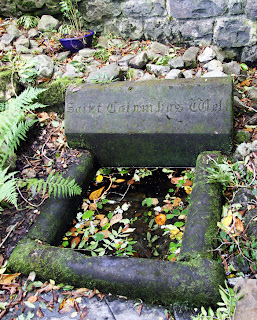 “You mean somewhere like Stonehenge?” is a common reaction when I tell people I’ve written a book on our main sacred sites, Britain's Holiest Places. If only my task had been that simple. Stonehenge is absent, an omission that will certainly raise a few eyebrows – so I will begin this blog by looking at the curious reality of such enchanting early sites.

We love our pre-Christian heritage, and rightly so. Britain’s standing stones are recognised around the world. They are archetypes of the human instinct to make our mark on the landscape, a permanent monument to a transitory life.

The first place I took my father-in-law, to whom my book is dedicated, on his only trip outside Russia was Stonehenge. As we paced the perimeter, he spotted two people who had been on the same flight as him three hours earlier.

It is sacred and spiritual to a level that is almost iconic. And yet…

There are no written records, nor even cave art yet discovered, that tell us the first thing about what the people who built Stonehenge did there. Bizarrely it was Julius Caesar, the Roman emperor, who gives us the first known written reference to pagan practice in Britain, though Stonehenge was over 2,000 years old by the time his invasion force set foot here in 55BC.

Archaeologists continue to announce new discoveries that might indicate some of Stonehenge’s functions: mausoleum, temple, palace, parliament, astronomical observatory – or a combination of any of these.

We simply don’t know whether they even considered it holy themselves. We don’t know what gods or god they followed – if any. Having had meaningful interaction with 500 holy places across Britain, I would dearly wish as much as anybody to know how to approach the evocative henges and enchanted stone circles that draw us to them with their primal energies.

There is an absence of authentic ritual that many would like to be addressed. I am sure organisations such as the newly recognised Druid Network will help to fill this void, with fresh interpretations of landscape and ritual that will satisfy those in search of spiritual experiences with a pre-Christian complexion. The Network was registered as a religious charity in September 2010 by the Charities Commission, the first such neopagan body to stand on an official footing. See the BBC News report for more information.

But I also hope that the reinvention of an older faith makes room for creative dialogue with the one that supplanted it. I can’t speak for the neopagans but I suspect many Christians won’t be happy at the prospect. It would be a loss for both sides, because there is a surprising amount for us to explore together.

I am talking mostly about the many places listed in my book where Christian and pagan activity overlapped in the earliest years of the conversion of Britain. Those who seek the original Christian church will find themselves increasingly bumping into pagans as they chart back through our history. Every single person in the early church knew pagans, and we can get closer to that original context ourselves.

Take just one example, the tiny holy well at Invermoriston in Scotland, which is named after St Columba and lies a short walk from the shores of Loch Ness. It appears in my book on page 505, and you can find information on the internet too. It was restored in 2005 and should interest anyone with a sense of the sacred.

St Columba came to Invermoriston himself in 565 when the area was still pagan. A Life of the saint records that a witch had cursed the well, which is pictured at the top of this blog entry. Local druids hoped it would poison the interfering missionary, who had come to see their king. Instead he blessed the waters and then drank without harm. Such anecdotes are invaluable: thanks to this story alone we can say confidently that pagans believed in black magic at natural springs, and we also understand how a previously pagan landscape was written over by the blessing of a saint.

I know what to do at this and other holy wells, thanks in large part to our pioneering Celtic missionaries. They adopted these sites from earlier faiths, and in doing so provide a continuity with the past that is entirely absent at monuments such as Stonehenge. The limpid waters of St Columba’s Well ripple with meaning when you touch their surface – a glimpse at secrets our ancient stones can not so easily yield.
Posted by Nick MS at 15:55