Standing amid the ruins 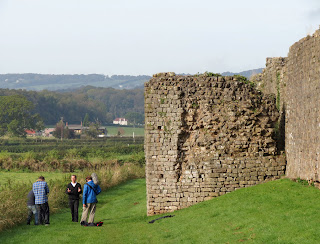 Where more evocative to start our BBC Four series than among the country's most magnificent ruins? These are icons of the British landscape, fixed in our collective imagination and capable of reaching out and inspiring anybody with the slightest interest in our island's history and heritage.

'Pagans and Pilgrims: Britain's Holiest Places' begins on Thursday 7 March at 8.30pm on BBC Four. We visit six of our grandest and most thought-provoking ruins in episode one, which are:

Neglect, wind and the rain, and the hammers of angry reformers alike have failed to eradicate these beautiful and thought-provoking places from our affections. It is ironic that these buildings are at the same time our most ruinous and also our most carefully preserved. Legal protection for historic monuments is the nation's way of saying that their history matters to us.

The first episode looks at how this apparently modern interest in heritage is part of a long story: even our nostalgia is nothing new. We visit the amazing Roman ruins at Caerwent, among the most substantial in northern Europe, and hear how the earliest Christian missionaries sought out such relics from a bygone empire as a building site for their humbler churches. Presenter Ifor ap Glyn is pictured above beside the remains of Caerwent's defensive walls.

And at Whitby Abbey the power of ruins to haunt our imagination is graphically illustrated by the tale of a writer who came in the 19th century and generated an entirely new genre of literature: Bram Stoker and his book Dracula.

While Coventry Cathedral's innovative combination of modern architecture with the shell of its medieval predecessor demonstrates that devotional use of a holy site can survive even the second world war's most intensive bombing raids.


Ruins might also feel to some like a particularly apt place to reflect on some of the current difficulties facing the churches in Britain. Consolation that the story continues despite modern-day controversies, and a reminder that decline and renewal are part of the lifecycle.