The consolation of a shrine 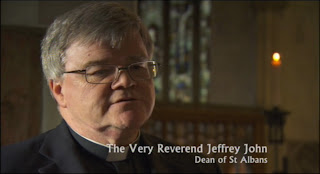 What is a shrine? English is one of the few languages that has a term for this specific kind of holy place. In other languages you need to describe it by using a general word such as tomb, sanctuary, chapel or church and elaborate from there.

Our language gives us a head start when it comes to marking out somewhere special. In this week’s episode of Pagans and Pilgrims: Britain’s Holiest Places we take a tour round some of the most surprising examples of shrines to be found in this country. The programme is broadcast at 8.30pm on BBC Four, and will be available on iPlayer for some weeks after.

Our somewhat unexpected starting point is the roadside shrine to Marc Bolan, the musician killed in a road crash in Barnes in 1977. I went to school near this colourful memorial, which continues to attract flowers, messages and visitors in great number, honouring the memory of a modern-day star.

It may seem a far cry from the scenes of medieval devotion that shaped this country’s landscape, centres of pilgrimage that dominated our spiritual and cultural life for centuries. And yet our programme contains interviews with two of the country’s leading churchmen, who both describe the witness of saints and their shrines in strikingly human terms.

The Very Reverend Jeffrey John, Dean of St Albans Cathedral (pictured above), gives an eloquent explanation of the desire to remember a loved one, an instinct that anyone can understand. “The main thing is that it’s a physical connection with the saint. We do this kind of thing in ordinary life… people sometimes keep a piece of jewellery from a loved one who has departed, or even a lock of hair.” 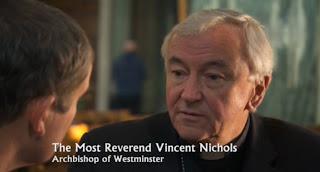 The Most Reverend Vincent Nichols, Archbishop of Westminster, leader of the Roman Catholic church in England and Wales (pictured above), also describes shrines as a testimony to human love for the departed. “There’s if you like not just a memory of the relationship but a living relationship with saints. I think it is sometimes a misunderstanding that we worship saints. We don’t. We offer them our love and we ask for their prayers.”

Archbishop Nichols goes on to describe the public outpouring of grief for Princess Diana after her death in 1997 as an authentic example of such reverence. This moment, he suggests, makes a return by the English to older ways of thinking about loved ones who have died, an end to the Reformation. It's a thought-provoking comment, as the Daily Telegraph has picked up among other commentators, but one that helps explain the restoration of shrines in British cathedrals and churches in the past two decades.

Our programme ends at a place as far removed from the mighty cathedrals and grand shrines of Britain as it is possible to be. The remote church at Pennant Melangell in north-east Wales was filmed on a bright winter’s day, golden sunshine on freshly fallen snow that looks a vision more of heaven than earth. It contains the shrine of someone whose witness is mainly remembered as nothing more complicated than a love for the land and the wildlife that kept St Melganell company as a hermit in the 7th century.

She is often shown in the company of hares, in memory of the time she saved an animal from a hunter’s dogs. There is no city-centre cathedral to honour her memory: the valley remains as unspoiled as it was when she called it home. It is a place to commune with the elements. St Melganell’s emotional connection to the natural world somehow endures unaltered.
Posted by Nick MS at 04:26