Back after centuries of neglect 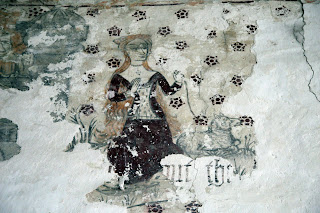 It has come racing back to life after aeons of neglect, delighting the faithful and drawing thousands of website hits… Alas I'm not talking about this blog - though it has indeed been shamefully neglected this autumn - but rather a spectacular medieval wall painting which is in the news this week after its breath-taking rediscovery at a church in Glamorgan.

The church is St Cadog's in the little village of Llancarfan, south Wales. I wrote about it in my book on Britain's holy places, even though the restoration work had only been fragmentary at the time of my visit in August 2010, revealing a few faces and a queen with a lamb on a leash. The painstaking cleaning work has revealed the largest known mural of the life of St George to be found anywhere in Britain, and restorers have recently removed the scaffolding to allow visitors a proper look.

It might make me sounds like a nerd, but I have to admit I did often wonder about what more was lying hidden under centuries of whitewash in this seemingly modest little church, with its short tower and sparse parish. The BBC News item linked above offers a long look at the central figure of St George on his horse attacking the mythical dragon, something that was impossible to make out when I visited from the scattered patches of brushstrokes that had then been revealed.

Some tales and some places linger in the memory. The rediscovery of such a vast work of forgotten devotional art in the past five years is without recent precedent. It was only the presence of a thin red line of paint high up on the wall that alerted the experts to the existence of this magnificent and extensive treasury of medieval art.

It is an irony perhaps that St George is likely to be one of the least popular subjects to adorn the walls of a Welsh church, given his close identification with the English monarchy, and in particular with the knights of the realm. And yet there he sits on a magnificent horse, shown in lingering detail on the BBC News piece.


We considered visiting this little church for a follow-up television series to our BBC Four series Pagans & Pilgrims. It is a building that vividly demonstrates the interplay of patriotism and religion in the medieval mind, and also possibly the finest Welsh wall paintings yet to be uncovered in any church.

So far our second series has not been commissioned, despite the success of the original. Even so BBC Four seems to have picked up a habit of making programmes about holy places and our country's amazing religious heritage, with two other series also broadcast this autumn: Cathedrals, which looked at the inspiring people who work at my own mother church in Southwark, and Pilgrimage with Simon Reeve, a new series which seems to be showing a spiritual journey from the point of view of a benevolent but disengaged non-believer. Something for everyone there perhaps.
Posted by Nick MS at 14:14