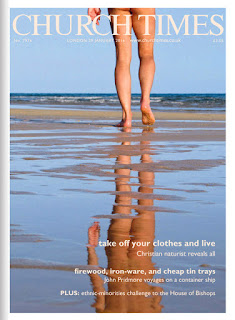 It's not every day you wake up to find yourself naked on the front cover of Church Times, the august publication for hard-working vicars and other gentlefolk of the Church of England. In fact - and I'll go out on a limb here - I'd even say it is not something that happens any day, since I might just have managed to be the first person who can add this particular event to my CV.

I wasn't exactly expecting it, although it's not a complete surprise because I had written a feature for the newspaper about naturist holidays and the many Christians who go on them. Church Times has a remarkably good feel for the eye-catching possibilities of all religious news, so I suppose it makes editorial sense they took the rare opportunity to choose nudity to lead this week's edition.

Last week's edition raised a small media outcry (well, Daily Mail at least) objecting to the presumably light-hearted suggestion by the Bishop of London that growing a beard might endear a [male] vicar to his neighbours in a multicultural part of London. At least this week's edition won't get accused of the same thing!

So although the cover might get a few grumbles, as I intend to explain below this topic isn't outside the realms of British culture and tradition, particularly so during our long Christian era. The article itself recounts the experiences of six CofE priests and ministers who are naturists, seven if you count me, and explains how the two sit side by side, or together for some people. I don't personally consider myself a 'Christian naturist' as a single category any more than I would consider myself a 'Christian sunbather' or a 'Christian Londoner', although in all of these the two can interact in some circumstances.

Naturists are famously shy about admitting this is something they do, but I think the best policy in all in life is to be open and honest, and take whatever people fire back at you with good grace and understanding. Not that I've ever heard any significant negative reaction to my lack of bathing attire, despite being completely open about it (and writing guide books on it a few years ago). Heck, I even ended up on the front page of The Times newspaper, which means today I have mooned at the full set of readers of papers with the word 'Times' at the end.

One of the great myths about our country is that we are unusually prudish and repressed about the human body. Looking around the world at large I'd have to say we're much closer to the opposite end of the "heavens-cover-up-the-table-leg-before-I-have-a-heart-attack" scale of sensitivity, even considering our Victorian heritage. And when it comes to nudity for mundane activities such as swimming, our history is not nearly as buttoned up as common consensus would have it. Perhaps nowadays we are among the worst culprits when it comes to conflating the two distinct - if overlapping - categories of sex and nudity. It was not always thus however. We are north Europeans too, if not quite as 'northern' or as 'European' as some of the others.

Nude bathing might seem like an exotic, continental and Scandinavian pursuit, but I've been surprised in recent years by the number of older people, men especially, who claim to have learned to swim without clothes on, in swimming pool lessons here in Britain. Unthinkable now for sure but it goes to show how far custom has changed even within the course of a lifetime, and long after the Victorian period ended.

And it's not just men either who have experienced skinny-dipping. Near to where I grew up there was a lake, called the Black Pond on Esher Common, which is secluded amid shrubs, trees and a circle of reeds. This was a ladies' bathing pond, and the custom right up until the early 1970s was for swimmers to bathe in the nude. Again it is seemingly unthinkable now, but yet within living memory, and once part of the British landscape in leafy Surrey.

These various customs represent an unbroken tradition of unfussy bare bathing that stretches back all the way to – I'm pretty sure – the birth of the human race. Christianity has rarely had an absolute problem with bathing in one's birthday suit, and even its reaction to mixed naked bathing from late Antiquity onwards has been nuanced, and never consistently opposed.

As St Augustine of Hippo himself pointed out, it's all about context:

"Because it is a shamefully wicked thing to strip the body naked at a banquet among the drunken and licentious, it does not follow that it is a sin to be naked in the baths."
Augustine, On Christian Doctrine, Chapter 12.

Roll forward a millennium from Augustine and the late middle ages had still not seen the invention of the swimming costume. The beautifully illustrated devotional book the Très Riches Heures du Duc de Berry has a charming little scene of swimmers on one of its pages illustrating the activities of the month of August. Not only are all four stripped off to bathe in public, near a road, they are clearly a mixed-sex group of adults, a woman sitting on the bank a few paces from the men enjoying a cooling dip. I defy any Christian to find such a prospect anything other than innocent, harmless and rather inviting on a hot day.

This scene is tame in comparison with what can be seen on so many medieval church walls in any case, crowds of naked figures jostling in a Doom painting. At Hardham in Sussex the local congregation sat in front of a huge wall painting of a naked Christ being baptised, which would have rather livened up any sermon on the Incarnation. Or any sermon, come to think of it. A similar image can be seen in more detail at Black Bourton church in Oxfordshire.

In South Leigh's lovely church of St James, also in Oxfordshire, the cluster of souls awaiting judgement are quite naked - apart from the bishops and royals, who are endearingly allowed to keep their hats on. Alas for the bishop of London though, it appears beards are banned in the afterlife. 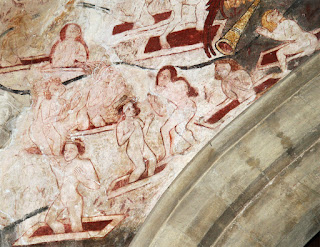 Back in the world today it is not just church walls that are certified nude-free. Even the changing rooms of a public swimming pools are being altered to design out any possibility of even single-sex bare skin being seen. There are no doubt some good reasons for these moves, and I can't imagine I would have been at all impressed at the prospect of enforced nude swimming lessons, and I say that despite being a naturist for as long as I can remember. So it happens for good reasons, but I can't help wondering what the effect is of completely shutting down any sense of commonplace, mundane nudity as part of everyday life experiences for people of every age.

If the termination of commonplace nude bathing opportunities has been sudden and, despite what we might now assume, contrary to our long culture in Britain - so too perhaps the naturist movement is something of an over-reaction the other way. Mixed-sex nude bathing, not to mention socialising in a naturist environment, might well be a step too far for many people, oversteering against the tide.

But if so it is a necessary over-correction, because the body deserves better than a one-sided debate or fixed moral position, certainly in any Christian-based culture with our heritage of Greek and Roman attitudes mixed beneath the Mediterranean sunshine. The body is far too contradictory and multifunctional to be stuck in any particular box: the nude can be a symbol of innocence or licentiousness, physical prowess or weakness, confidence or humility, athletic strength or frail vulnerability, even birth and death. Perhaps, in the context of swimming, it once had no meaning at all.

Italy covered up some nude statues just this week to avoid offending the different cultural and religious values of Iran's president, classical works of art that were never intended to be offensive, and would not normally considered as such either in Europe. The same can be said of the vast amount of nudity in Christian art too, representations that are unthinkable in other parts of the world but nothing to be ashamed of.

It's probably not an exaggeration to say that people today are seeing more images of naked people, as opposed to real naked people, than at any point in human history. Perhaps there is a link between the astonishing rise in pornography and the end of mundane nudity. Like any other natural resource, the body appears now to have been removed from public space and packaged up for resale back to us, like the forests, land and water. I may be wrong but I think there is reason why the first top-shelf magazines in the 1950s and 60s depicted nudists, people outdoors enjoying the sun and water. Breach that last line of defence and the body no longer has any public space for innocence or freedom.

The numbers of nude images online must run into the millions by now, most of them in a different category to the innocuous Church Times cover. So perhaps it will encourage a few curious readers to wonder if there is another way of looking at what it means to embrace our humanity, even to peer beyond Adam and Eve's fall from grace and wonder what it was like there.

My article was slightly truncated to fit the space, but I did intend to stress out that naturists have no copyright over outdoor nudity, and anyone should be able to enjoy a skinny dip in the wild every now and then. My Christian inspiration for this ultimately derives from the idea of the baptism, being born again in natural waters wearing our original birthday suit once more, but that is a topic for another day.

One thing will say after a lifetime considering all such matters from a Christian perspective, is that from a theological perspective I can never accept that the body should be reclassified as an inherently pornographic or obscene object. Jesus had a body and it never was either of those things.
Posted by Nick MS at 15:58