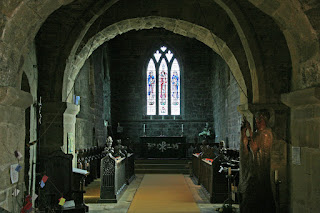 A landmark shrine for Bede?

Britain's first and only doctor of the worldwide church has a surprisingly peaceful corner of a city dedicated to his memory. Surrounded by the busy conurbation of Newcastle, Gateshead and South Shields, an enclave of riverside tranquillity has somehow survived on the very site where the Venerable Bede created history, both literally and figuratively. That this site was briefly under threat in recent months is almost too shocking to contemplate, something the national media has thankfully appreciated.

The stone church in which Bede worshipped still stands, its dedication stone from the year 685 the oldest in the country. Facts are scarce commodities if you happen to be studying the early British church, but this one is solid enough to put a dent in your head should it happen to fall on you. It won't, needless to say, since this church has been standing for 1,330 years and counting.

The building that Bede knew is so small it serves only as a little chancel to the much larger church that has built up around it, a holy space dimly lit by a row of tiny windows high up, containing fragments of 7th century stained glass. Its confines demonstrate just how far the great writer and thinker transcended both time and space.

Walking into this ancient room today, pictured above, it feels narrow and dark despite the later addition of larger medieval windows. Yet in Bede's day this was the outer limits of architecture, a marvel of carved stonework and coloured glazing that would have made jaws drop. Its preservation is remarkable, a fitting counterpart in stone to the many manuscripts that have transmitted Bede's written testimonies.

The fact that the adjacent museum, Bede's World, has managed to fit in an 11-acre working medieval farm says everything about the air of seclusion that preserves this remarkable site. A quiet enclave on the edge of a busy industrial landscape, surrounded by trees and parkland with a 7th century church at its heart. Does Christian heritage come any better than this?

Sadly though it transpires that the museum has run into difficulties in recent months. It has temporarily closed due to a lack of funding, although fortunately a possible new manager has recently been announced in the shape of the environmental charity the Groundwork Trust. I can not help wondering if the church will play a more active role in the revived centre under its new lease of life.

Mark Bryant, bishop of Jarrow, is listed as one of the trustees of the previous custodian, the Bede's World charity, which is currently in administration. Whether the church maintains its connections with the new management will be interesting to follow, and one can only hope the relationship becomes stronger rather than weaker.

The charity that used to run Bede's World explicitly lists the joint promotion of both museum and church as one of its chief purposes. Visiting this lovely and atmospheric site for research into my holy places project, it did feel there was something of a disconnect between the two centres here, which are just 200 metres apart across a small park. The Groundwork Trust has good roots in the design sector, and I felt then as now that some sort of creative landscape corridor between the two would greatly improve the historical and spiritual impact of the visitor experience.

Bede's church broke new ground in its day, the first place to show off stained glass to an awe-struck population. An innovative piece of environmental design or landmark work of art would surely be the best way to remember this outpost of creative brilliance. Government cuts are a large part of the reason why this museum has got into difficulties, economically illiterate and intellectually hostile to Britain's cultural history in equal measure. The potential of good heritage sites to generate income and regenerate place have been left to one side, but the case for funding greater integration between the Bede's World site and the church seems compelling.

The lack of relationship between museum and church was a disconnect I felt at numerous sites of national historical importance on my journeys around Britain, but it is more acute at Jarrow than elsewhere because this is such a foundational site, and because it has so much potential.

Perhaps the museum won't ever be interested in pilgrimage, and the church will certainly never regard itself as a museum. But somewhere between the two lies one of the greatest cultural and spiritual heritage centres this country has to offer.

This is after all an unusual pilgrimage site because it doesn't have a shrine as such. I can't help but wonder what effect the creation of a National Shrine to the Venerable Bede would have on the status of this interesting assembly of visitor attractions. Just 12 miles away stands another ancient church which is effectively part of this same complex, the Monkwearmouth monastic church of St Peter. Bede's monastery was known as Monkwearmouth-Jarrow, a twin monastic complex split between two locations. Although St Peter's is not as well preserved or as secluded as the Jarrow site, it contains just enough original fabric to embellish the story further.

Thus it seems to me that two of Britain's oldest stone churches and a beautiful, modern museum might benefit from a clearer focus, particularly one with such impeccable credentials as the authentic experience. It might be argued that pilgrim sites will only attract the devout, but even a brief read of Chaucer will demonstrate that this has never been the case.

I do not know any of the people involved in either the church or museum personally, but none of the press reports describing the fate of Bede's World refer to any Anglican involvement in negotiations about its future. So far it seems that the environmental charity Groundwork is being presented as the saviour, thanks no doubt in large part to the fascinating and extensive medieval farm which is part of the museum complex. The Groundwork Trust is a good fit and a laudable choice, but the church has a far longer pedigree when it comes to safeguarding space.

As my own research into the early British church is steadily revealing, protection of the landscape was once hard wired in to Christian mission. The church was once the environmental charity of its day: the National Trust, English Heritage, the RSPB, the RSPCA and Groundwork have all become worthy successors to the church in protecting the natural and built heritage of the country. But as Bede himself wrote so often and so eloquently, the early saints too would gather animals around them, preach to birds and worship among wildlife.

I will publish my discoveries in due course, and it will be another book that encourages love for the landscape. Whether the church will rediscover some of its cosmological impetus for protecting place as well as people remains to be seen, but it's a topic close to my heart, and I think as relevant today as it was in 685 AD. 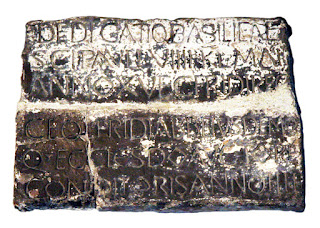 (Above: the dedication stone at St Paul's Church, Jarrow. The first word dedicatio is as easy to read as Latin gets)
Posted by Nick MS at 17:34